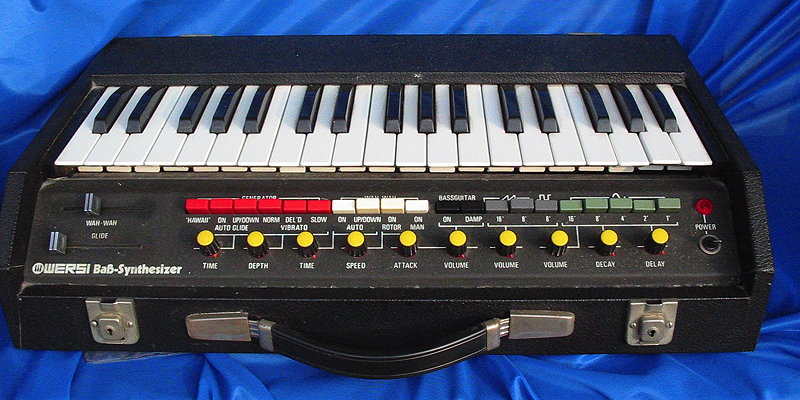 First of all: this unusual character in the synth's name ("ß") is a special german letter. It is more or less the equalent to a double "s". And to make things more complicated: the german speaking parts of Swiss don't use this letter officially.

So what is this little suitcase synth that was made in germany all about? Well, here we go ...

It was build in 1977 (?) and is a monophonic bass synth. It was available in kit or assembled (?) versions. I is based on a master oscillator and then its output is divided down the 12 notes of an octave. This audio signal is then used in different ways in one of the three simultaneous available sections (left to right):


And then there is the Generator section for modulations of the pitch.
We get a "Hawaii" momentary push button for adding a glide to the change of keys. The time for this effect is adjusted with the knobs labeled TIME. The next push button switches on the AUTO GLIDE. This adds a downward pitchbend to the note start. And the next button changes this to an up/down like modulation. The timing is controlled by the knob named above. The VIBRATO gives you three knobs: NORM (normal), DEL'D (delayed), SLOW.
The function is very easy to guess. And the adjustable parameter is only the knob for the DEPTH, because the speed of this LFO like modulation is set by the push buttons NORM and SLOW. But the rate is OK to most uses. So this is not a big problem at all.
The GLIDE labled lower slider on the left hand of this section is a pitch bending slider. Well, without a center detend or any other way of knowing where you should "park" it, it is a bit useless.
The WAH-WAH section got four white push buttons and two knobs:
The buttons allow you to select: ON AUTO, UP/DOWN (auto), ON ROTOR, ON MAN.
The later allows the player to use the upper slider on the very left to change the filter's cutoff frequency. The filter is a lowpass with plenty of resonance included. typical 70ties sounding. But the sound is a bit on the diat side of boom. The Automatic normal function ("ON AUTO") gives you a decaying only envelope modulated WAH-WAH effect. The "UP/DOWN" is an attack and a release modulation. Both use the knob labeled TIME for adjusting the attack and decay/release time.
The so called ON ROTOR in this section is simply another LFO modulating the cutoff. The knob for adjusting the cycle length is named SPEED. It is a bit strange done (at least on my unit), because the seeds get slower by turning the knob clockwise. This is a bit orthogonal thinking ;-)


And on the very right you spotted alreaddy the Power flap switch with the big red control light. 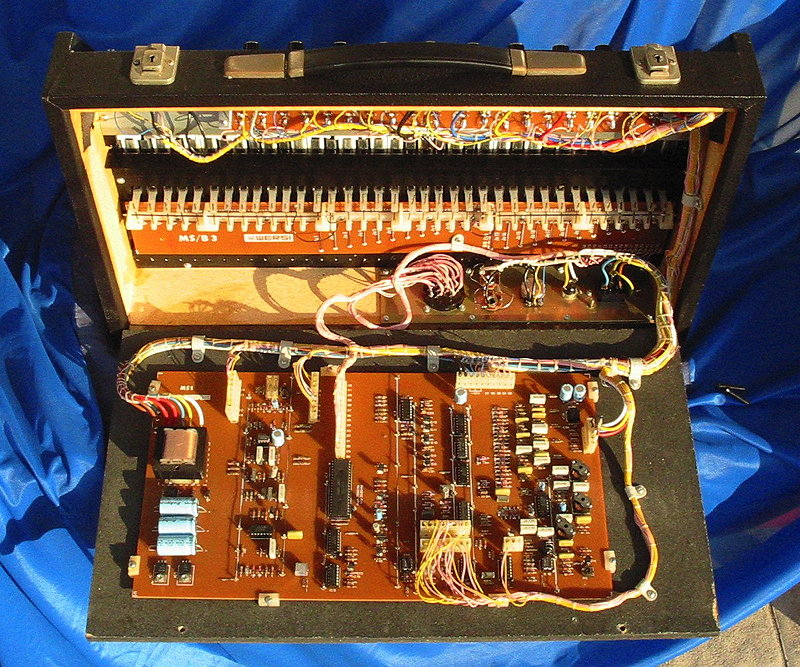 Inside
By undoing two screw on the bottom plate of the unit, you can open it by setting the unit on its backside's little plastic feets and opening the bottom plate by pulling it downwards to the floor. Nice for easy service and assembling. Here you see all electronics inside. Not very much inside. The long thread bars and the bundle of cables from the backside connector for the 12 key foot pedal keys are a bit surprising today.
BTW: did I tell you about the connectors in the back yet?
We have the multiple pin pedal connectors socket, the LOW and HIGH 1/4" outputs, the master tune knob and the AC inlet here. The unit were most likely only available in 220 Volts version. But soldering in different parts for a 110 V mains shouldn't be that difficult. The fuse housing is labeled 0.1 Amp. So this unit is consumpting less then most little lamps next to our pillows at night.

Is there anyone with more details about the used technics for the filters?
Or maybe some schematics that survived the last 28+ years? 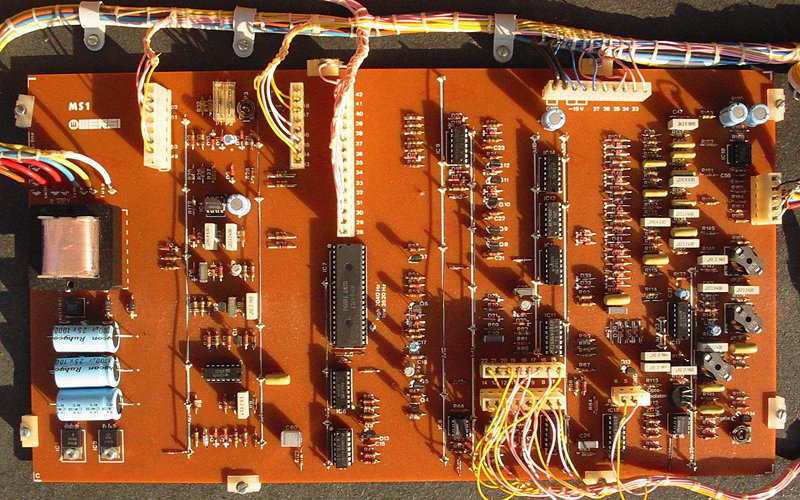 Sounds
here are some uncompressed 44 kHz mono .wav files recorded straight into my iMac with no additional FX: