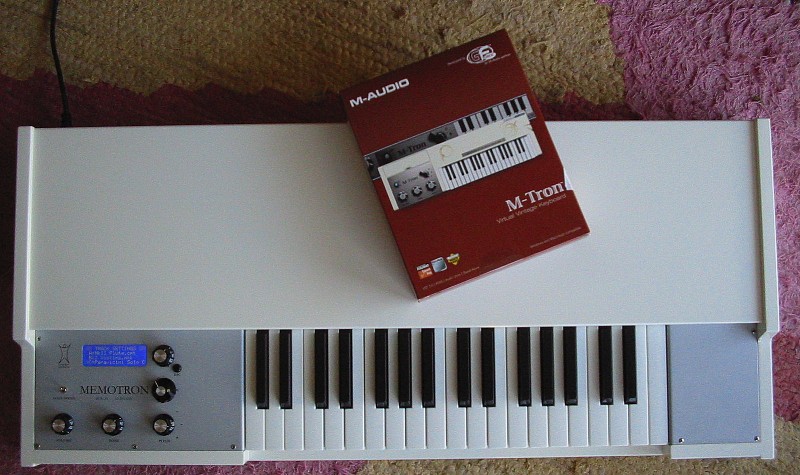 (Remark: I swapped the original Memotron knobs with real Minimoog knobs for a more vintage look)


This is the machine that made my dreams come true:
A fully working Mellotron, without the hassel of tapes getting older and older, with no mechnical problems and costing less then the real thing. But with the very same sound and feel.

You load sound either from the Manikin sound CDs ("Vintage" and "Studio" were the first, 8 CD available as today for a total of 131 sounds), from the CDs of the original M-Tron library or from Compact Flash Cards. You can also store sounds from the CDs to the Flash Card.
So you get the full collection of all the classic Mellotron™ sounds plus some less known ones. All of them are stored, of cause, without looping in all their max 8 secs glory. And the Memotron plays them back without voice stealing or the hassle of changing a tape frame.
You can load three sounds one after the other to keep them in RAM for instant usage. And because you are not limited by the real Mellotron tracks being on the very same tape, you can choos three sound from the library and play them together. And the Track selector switch also allows you to cross fade somewhere between the track. So you can for example mix the Cello and the 3 Violins to one new sound easily on the fly.

You can also store the loaded combination of the three sounds for reloading them in one go as a so called FRAME. This data is not storing the actual sound them self, but the pointer to them. So you may rather like to use this for combination of sounds made from one Sound CD or from the Compact Flash card. The CF card is needed to store these frames onto, as a CD obviously is not able to store your own data. 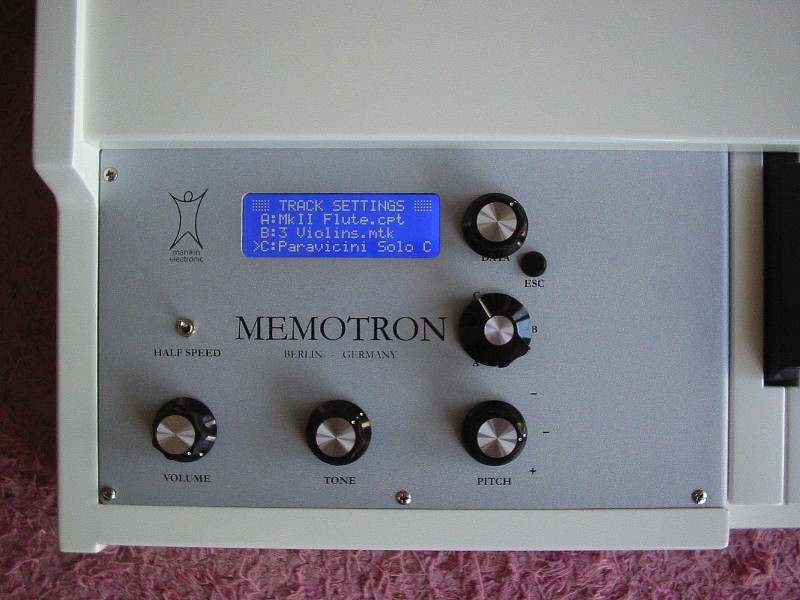 Besides the obvious volume control, you also get a center detent pitch knob. And just like on the real thing there is no spring returning it to zero. The Tone controll appears to work way more on the sound then the real thing. You get a 12 dB lowpass. For a more vintage sound set this knob to somewhere between the 2 o'clock and the 4 o'clock position. Beware of setting on the counterclockwise end of this knob. It might filter everything of so you get silence and wonder what's happening.
The little switch above the Volume is labeled Half-Speed. It plays back each sound at have the speed. This gives you an one octave lower tone and doubles the length of the tape to up to 16 secs. Some vintage Mellotron players liked it. And it is endeed doing something useful on some of the sounds.
The Data knob is the only encoder knob. And it is doubling as ENTER or OK button by pushing it down. It appears to use the same type of encoder as the Manikin Schrittmacher. The Escape button is used to say NO or to move upwards in the easy to use software menues.

Inside the machine are more parameters available:

And there is a little FX build in. It gives you some reverbs, delays and chorus FX. Its rather an add-on then a full FX for studio recordings. Think of it as an extra for live concerts.


In the back there is a power cable in, a Volume control pedal in, left and right Audio outputs and a little knob for adjusting the contrast of the always good to read display.

And if you ask yourself now: "where is the CD slot in the fine white wooden housing?", here is the answer:
the slot-in CD reader is under the panel. It is just a little slut to the front. You have to eject CDs through the software functions.