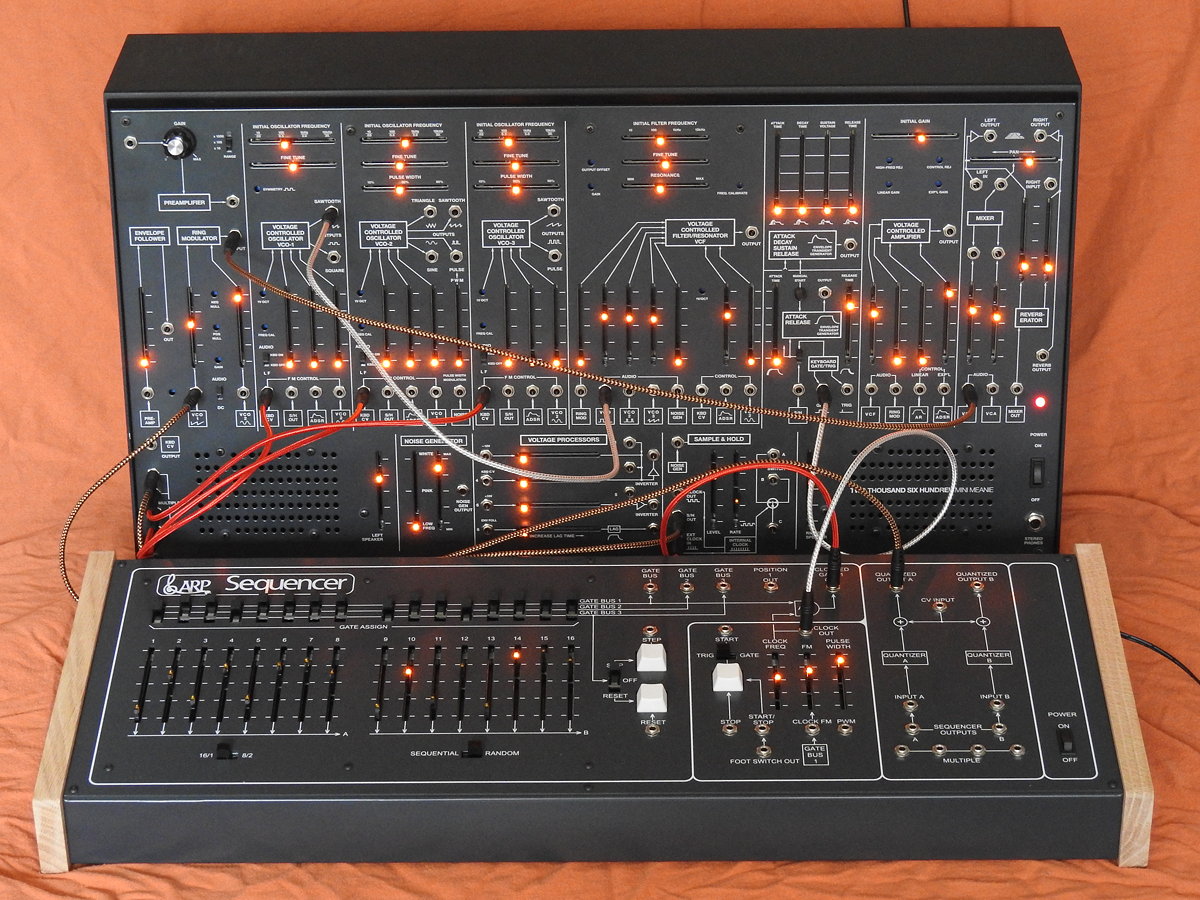 TTSH here shown with the ARP 1601 Sequncer clone. See and here this patch on YouTube

The short "TTSH" stand for "Two Thousend Six Hundred", aka the famous ARP 2600. And this TTSH is a size reduced (about 70%) clone of this semi modular ARP synthesizer built in different versions from 1970 to 1981. The vintage ARP 2600 was used by many synth musicians in those days. It also well known to be the synthesizer that made the R2D2 talk.
The TTSH boards wer available from late 2014 till 2017 as a DIY project. Some people offered their work to assemble it for the non soldering synthesizer enthusiasts. It is electronically a quite faithful reproduction of the original. There is the original Moog filter (ARP module 4012 1970-76) and the later integrator cascade 4-pole low-pass filter (ARP module 4072, 1976-81 available. In order to work in a well scalled manner, you have to recalibrate the filter trimmers on the main board when switching the filter submodules.

My unit was bought used. It is from the revision 3 that was released December 2016. It is the latest version. On my unit there is also a added modification to trigger the envelopes with less than the 10 V needed on the original ARP 2600.

It got the following sections that are quite well chosen pre connected:

Connecting a cable at one of the sockets (here all 3.5 mm) will break the connection from the output labeled below. So you can add special need connection, and don't have to patch the most typical connections at all, as they are already patched internal for you. This saves time, and helps avoiding spaghetti salat in front of the panel. 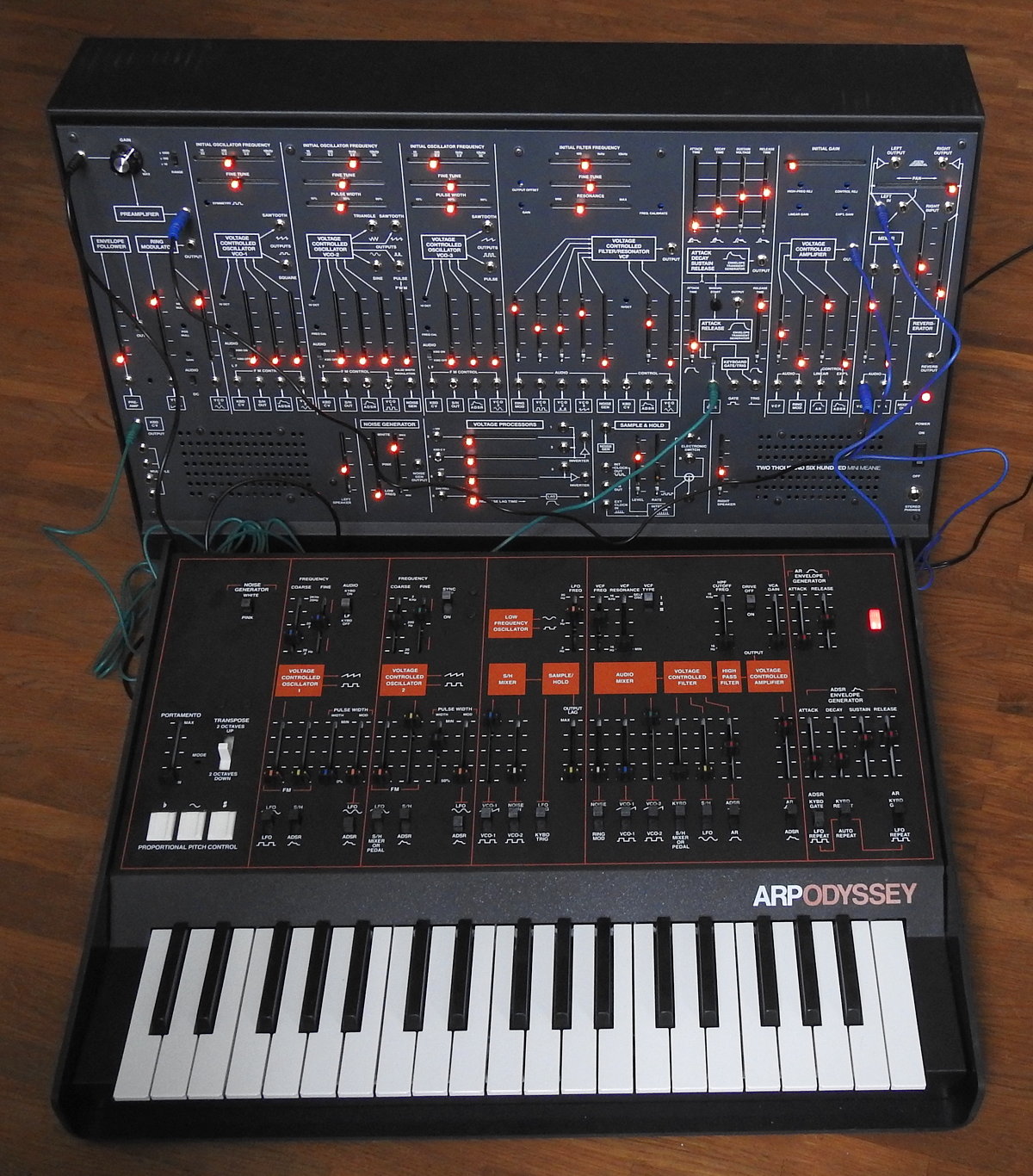 The ARP Sequencer model 1601 was a very felxible analog step sequencer. Finally the rare original units were cloned by some DIY based project. I bought it assembled by DSL-man.de (recommended!).

This sequencer got 16 sliders for the adjustable voltages. These are bundled in two times of eight. You can use the sequencer either in a 1x 16 step mode, or use the two slider sections for eight steps with two different voltages per step. There is besides the normal left to right playing mode a random mode. Each of the 16 sliders got the three position switch above to select three different gate outputs. If you use the FM named slider in the middle of its range, all steps set to Gate 1 will play only half as long as the others. So it is easy to play some more rhythmical patterns. The PWM marked slider is controlling the gat length relative to the note length. So you can have staccato to legato played sequences. But this is not per step, until you patch for example gate 3 to the PWM socket below the slider of the same name.

For most musical usage, you will use the included quantizer functions of the CV output. There are to quantizer to use the the group of 8 steps individually for quantized pitch. When using the quantizer CV output, the step sliders covers to octaves. On this clone there is a little center detent, so you can have 3 easy to find defined CV pitches: Slider to zero = 0V at the CV out, center 1V, top 2V. Much like the Moog 960 sequencer (and its clones), where you got the same three voltages on the pots fully left, center and fully right positions. But on the original Moog modular where no quantizers (but they are available for new Moog size modulars).
The CV input is used to transpose sequences by an keyboard or even another sequencer. This is a helpful extra.

So all in all, the handling is for the basic musically usages easy and faster as on the famous Moog 960 step sequencer. Musicians like Manuel Göttsching always preferred using this sequencer in the pre lap-top age of Berlin School / Krautrock music.