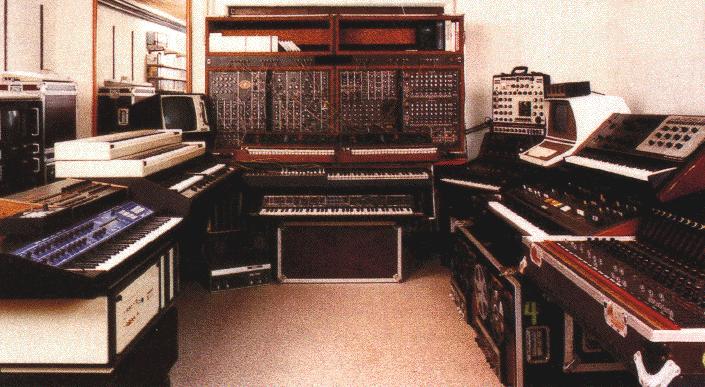 
Always from left to right and from the front to the rear:

left row:
EEH DS 500 and LinnDrum atop a PPG Wave 2.2. All this atop a Fairlight CMI II main unit. Slave and Master keyboard of the Fairlight CMI II atop Mellotron Mark V. Fairlight CMI II computer monitor with light pen. On the floor a Revox A77 Tape recorder (Is this the one KS used in the studio as analog tape echo?).

At the rear wall:
Custom built housing for the Moog modular IIIP with 2 sequencers #960 in the fourth case at the right of the housing ("Sequencer Complement B"). There used to be two PPG analog sequencers #314 and a few PPG VCOs #301 in the now unused holes at the top of the housing. In front of the big box are 2 (two) Mini Moogs. KS had even a third one during the dig it/ trancefer times in the early 80s. A custom built PPG CV-keyboard with CV-sliders to control the big Moog. Under this is a PolyMoog synthesizer.

The right row:
Unknown mixing board. This one was used in the 70s. GDS keyboard atop a Yamaha CS80 synth. A little more to the rear is the GDS computer terminal with a little unknown box on top. Under this and the CS80 are two Revox A77 in a special flight case. These two tapes were used a Schulze´s analog tape echo till the early 80s. At the room corner is an EMS Synthi A atop EMS eight-oktave filter bank. The first black unit under this is barely visible. It is an ARP Sequencer. And under this is KS second ARP Odyssey Mark II (the black one without the sticky-out keys). What happened to his first one, a white model Mark I ? Not visible here is the GDS main unit with its classic 8 inch floppy disks under the ARP Odyssey.

zurück zu der Galarie
back to the gallary